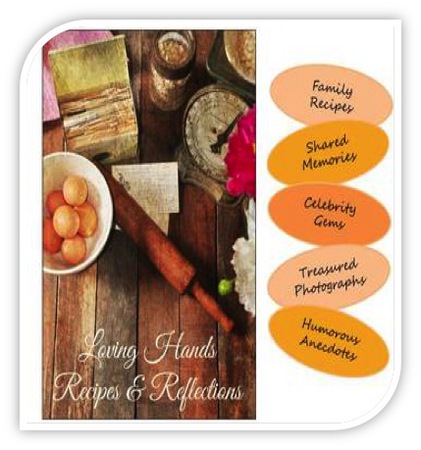 This cookbook has 215 delicious tested  recipes, hand-me-downs, some dating back generations.  With its humorous anecdotes, treasured photographs, celebrity gems, and family memories, it is so much more than a cookbook.

An excellent gift for family and friends.
A lovely hostess gift.

Available from any 4Gs member or e-mail your order here.

The Process for Developing a Project: EXAMPLE: Loving Hands: Recipes and Reflections.

....... There is a process to developing a project that begins with planting the seed of an idea to fruition of a project ready to raise money for the Grandmothers Campaign of the Stephen Lewis Foundation. Although each  project has its own unique characteristics, there are shared stages in the process. In the case of the cookbook it took eighteen months - a labour of love.

The Idea
....... The seed for it was planted  at the 4Gs December 2014 meeting, which included our traditional potluck finger foods luncheon. The spread was impressive, the food delicious. There were the usual requests,  "Please share that recipe."
....... It was member Sheila who commented as an aside, "We could create a cookbook of these wonderfullly, delicious  finger food recipes."
....... "The rest," as they say, "is history. "
....... What is the historical development and current reality of that seed?

Motion of Approval in Principle
.......We followed our protocol starting with a call for a motion for the idea-in-principle at our general meeting. It  passed unanimously.  Then the call for a minimum-committee-of-three to explore the idea further and report back. There were six volunteers who leaped to the fore, including desktop-publishing expert, Sheila.  (A necessary skill for an endeavour such as this.)
The committee did their feasibility study which had to answer the typical questions:  What will this project "look like"?  How much work will it be?  What will be the overhead costs?  What will be the potential for profit for the Grandmother Campaign?  What is an estimated time line?  How will it be promoted?  etc. etc..

Motion of Approval to Accept the Project
...... The committee came back and proposed a motion for approval.  Their recommendation that we pursue the project was backed up with their feasability study which included draft promotional tools.  There was rigorous discussion with a Q & A. In the end, the motion was heartily approved.

Registration and Approval by SLF
...... The next step was presenting the plan to the Foundation for their approval, blessing, and support.  This included presenting draft promotional materials  prior to printing (e.g. posters, flyers etc).   this had included the utilization of all their supports, (e.g., materials, resources, terms and conditions).  See the Foundation approval process.

Implementation
...... The cookbook committee kept us informed and entertained the general membership with stories of progress and their call to action on our part - - -  stories and trials and tribulations that included the submission by a noted Guelph chef that listed only ingredients;  and a Guelph celebrity's recipe that called for, 'a pinch of this and a half bowl of that.' (really?? 'half bowl and a pinch'!!) ; and the beloved grandma's family recipe that called for a 'handful or two of this'.  And then there were the funny, touching, moving stories of hard times in the thirties, or things gone awry, or traditional family gatherings. The committee made a call for a title. Fun, creative and clever suggestions were submitted, but in the end it became, Loving Hands: Recipes and Reflections.
......

At our June picnic meeting in Riverside Park, committee member Lynda's daughter, the award-winning professional photographer Laurie Goodman, did a photoshoot for the cookbook. Was that fun! Each section is separated by one of her creative photos. Visit Laurie's Facebook. .......

The Launch
...... All the "i's" were dotted. There was anticipation in the air to unveil the finished project.  It's a fun book of 180 pages with 215 tested delicious recipes, some dating back generations. But it is so much more than hand-me-down, tested recipes, - - - humorous anecdotes, treasured photographs, celebrity gems, and family memories.
On September 26th we celebrated the official Guelph launch, following the matinee showing at the Bookshelf Cinema of the TRIBUNAL film with a reception that followed in the Bookshelf's e-Bistro. We enjoyed delicious food samplings especially selected from LOVING HANDS and prepared by eBistro chef, David Leroy. There were cookbook sales tables, a cash bar, a running slide show about the Foundation, music, and of course, friendly 4Gs hosts. .....
.......  A BOOK WORTH HAVING!!
....... All proceeds of each $20 cookbook sale will go to support grandmothers in Africa, who persevere with great love and courage against incredible odds to give their grandchildren and other orphans what we all want for our beloved grandchildren - - - love, family, community, play, safety, education and all good things for their future potential.

Back to "Current Projects"